The lamp-posts in the village where we used to live were the old-fashioned type that looked like gaslights.

Waves of February sleet fell like a chill veil over each.

I can’t remember why my brother and I were walking back up the deserted main street that evening: it was unusual for there to have been anything for us to go to. Perhaps we’d just decided to head out in the foul weather, down to the river because there was nothing on TV and we were bored. We probably hadn’t even bothered putting our cagoules on.

We’d nearly got home, round the curve leaving the river out of sight, when from back behind us we heard the clear chimes of an ice-cream van.

We looked at each other.

We headed back down and hadn’t been mistaken: parked at the bridge was a genuine ice-cream van – with the light on and someone inside.

In those days I wore dungarees, with huge pockets. We both had money on us. I couldn’t quite believe someone would sell us an ice-cream in this weather, but he did.

We headed back up the street, smiling into our 99s.

No-one else came out.

Four decades later I still have no idea why someone would take their van out in the depths of winter, nearly 20 miles from the nearest holiday resort, to a village of only 400 souls fewer than a couple of dozen of whom were children, and try to sell ice-cream at nine in the evening.

In all the rest of the time we lived there, we never told a soul.

Last week saw a brief visit to Kirkby Lonsdale. It had all gone a bit old-school: we’d landed in a film set. 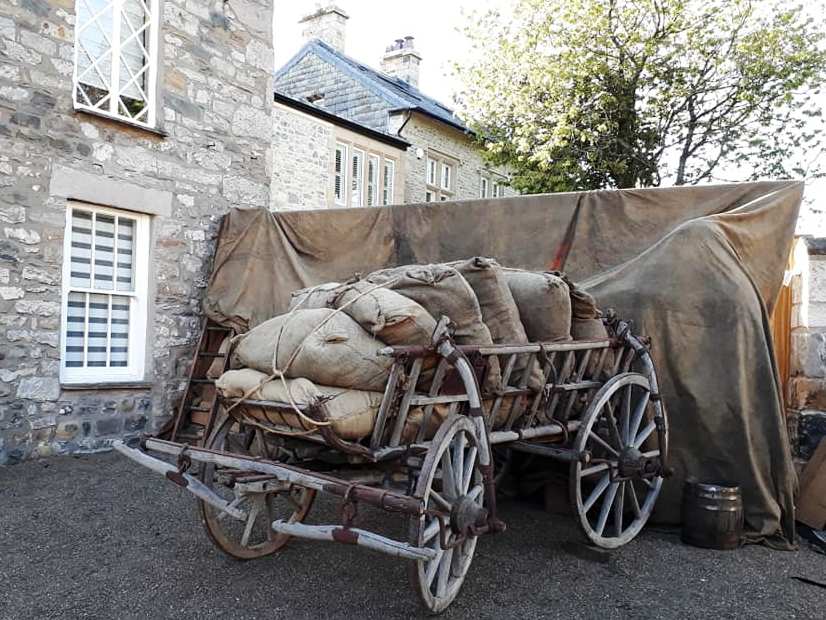 A few of these were parked about.

You’d not know to look at it, but that entire archway’s a ‘prop’! 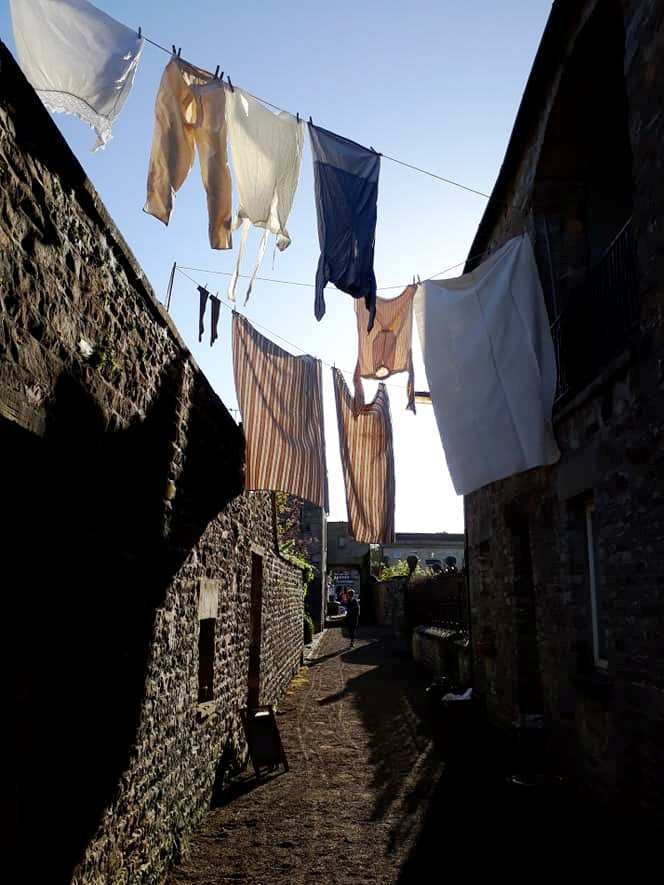 And prior to about 1960 no realistic street scene would be complete without laundry (there’s even a strategically-positioned washboard).

It’s a metal cock, standing on top of the world as if it owns the place.

Here is its story.

Strasbourg, Prague, Gdansk, Paris… and many cities throughout Europe are host to beautifully-designed, exquisitely-engineered astronomical clocks.

Being a mug for a well-turned piece of mechanical engineering, I have visited many of them. In the process I notived something of a coincidence.

All were built in the 6 decades or so following the year 1350.

Strasbourg started construction in 1360, with that mechanical metal cock. Prague was completed in 1404.

Why then, of all eras? After all, the technology involved was hardly new. Accurate astronomical measurements of the type reproduced here were being recorded in the 8th century Middle East, and incorporated into machinery with metal gears as far back as ancient Greece.

So why didn’t this take off for centuries, and why so suddenly? What were we all doing, in Europe, at the time?

The answer – to over-simplify but nevertheless – was, beginning to sell our labour. We, and all our time and work, had until then belonged to whoever owned the land we lived on, under the feudal system. But between the years 1347 and 1350 the Black Death carried off a third of the population. The remainder, traumatised and beginning to question their faith, still had to find a living. For the first time money, in the form of wages, began to make a regular appearance in ordinary people’s lives. Not just twice a year – rent and harvest – but all year round.

A way of life that would previously have been thought sinful had become enough of a necessity that the Church had to take notice. It became the arbiter of days.

This dial comes from a later version of the Strasbourg clock. It gives the saint for each date and, via the calculator in the inner circle, the day of the week.

Hours proved another challenge. Some conventions divided up the daylight into twelve parts, so that a summer hour lasted longer than a winter one. The astronomical clock in Prague displays those ‘unequal hours’ as well as regular ones. The newest Strasbourg  dial (1842) has regular hours, but includes pointers for sunrise and sunset.

You could buy or sell your hours, or hire-out anything else by the hour or day while the Church, hiding a mechanism it previously believed to be bordering on the satanic behind elaborate imagery of saints and apostles, acted as referee.

The Church, by measuring and displaying time, had enabled the beginning of modern capitalism.

To be fair, it was better than what had gone before.

A woman on the train is reading a horoscope page from a magazine. Why? Why does the magazine even go to the trouble and expense of commissioning them? After all editor, reader and pretty much everyone else since about the year 1780 know that they’re nothing but woo.

What, in the end, is that woman paying for? And why a woman and not a man?

The idea of money – the culture of assigning any ‘good’ a value at some point along a simple number line – has its benefits for sure. It brings us goods and information that we may otherwise never enjoy.

But where we’re not looking, something stealthy is at play.

We place ever more in our lives on that number line – either on the positive side (good food, great music…) or the negative: things we’d pay to avoid. We place things on that line that don’t belong there because in our haste to move in a positive direction along it we forget what else there is. We lose, without knowing it, the ability to appreciate – even to describe – everything else.

We lose all the other dimensions.

Superstitions – those little rituals that we go through though we can’t explain why – are like some kind of attempt to hang on to the world of those other dimensions. We observe them – always reluctantly as they appear so lacking in reason – because doing so gives us some extra connection with a broader landscape than the alienating one which we must navigate in daily life: the one that’s always owned by someone else.

That black cat is looking out for you. That first star in the evening sky is offering you the chance to pause and ask: what do I really want in life? That solitary magpie is warning you: steel yourself against some coming misfortune…

To take part in this is to believe that our surroundings are talking to us: that in some way they even care about us and that we ‘belong’. The Astrologer is extending this beyond the day’s landscape and into the night sky. Isn’t this, literally, priceless? Like love, or loyalty, or plenty of other things we can’t measure and therefore can’t own, it’s not on that number line at all.

Of course this doesn’t stop anyone in commerce trying to convince us all to the contrary. Think of all the adverts which mention the words ‘love’ or ‘loyalty’!

And finally why a woman? Perhaps, on the minus side, she’s even less likely than a man to own, or have much say over, the landscape or the time through which she moves. But on the plus side there’s still, even today, a little less social pressure on her to compete in this ‘number-line’ game: to conform to just the one dimension.