It is a truth universally acknowledged that writing a novel is not an instantaneous process. It takes time: often more than a year from first draft – the weeks of ‘just get the damn story down on paper so you have something to work on!’ to final grammar-nazi edits, and eventual publication.

Here, for example, is an extract from the first draft of Evening Lands, sequel to The Price of Time. Without giving the game away let’s just say that partway into the story we catch up with our villain Stan Mills, in his diffuse form, haunting a well-known Usonian* landmark:

No expense had been spared in the construction and furnishing of the building, its distinctive footprint stamped in the mind of everyone on earth.

But few know the interior: the terrazzo marble floors, the polished wooden doorways and dados; the daylight streaming into every corridor, each lined with a parade of formal, framed faces.

Grainy or sharp, fair or swart, relaxed or stern, all share something from a common well, for those who can only see: Fear. It gleams as a tiny shard in their eyes. They are all known to him: by name; by history. He permeates them: their thoughts, their hearts; their work…

Professionals in the science and art of communication: the subtleties that hide in the words and phrases of living language; the patterns of the networks of contacts over which words – and the thoughts hidden between them – propagate; the hard components of engineered infrastructure. The means by which information can be disguised using particles that are also waves…

Experts in the mortal mind: its form, its frailties, its irrationalities. In the living body: its highways, its weak points; its perceptions of reward and pain. The many and varied ways in which mind or body can be twisted, broken – made to malfunction; the various laws and conventions prohibiting most of these, and the ways of circumventing the latter.

Here, too, are artificial brains, and even minds, their abilities far exceeding that of any individual. The decisions handed over to such minds are month by month increasing in importance, working their way up the chain of command.

There is much to learn here: how can Fear penetrate such artificial minds? Can they be made to enhance it – magnify it? If so, might there be some means of feeding it back to the population? If not, then can they at least be made to fear, anyway, that such means nevertheless exist..?

When I wrote these words I made an educated guess that sometime in the near future – but not just yet – a way would indeed be found – or revealed to have been found – to ‘use the artificial minds to enhance Fear and feed it back to the population’.

My guess, in the best Science-fiction tradition, proved spot-on.

I just got the timing wrong: the Cambridge Analytica bombshell beat me to the press.

But look on the bright side.

*Usonian: here just intended to mean of, or about, the United States, rather than a particular school of architecture.

Ever become involved in something, or a member of a group, and you can’t recall how it happened? Or (sometimes), even when it happened?

Some writer friends had been, for a while now, putting up podcasts of their interviews. They’d choose a venue for its quietness, set up their recording kit, and interview one of their number about the fascinating background to their latest scribblings. This has included everything from the history of the French Resistance to the paradoxes in Quantum Mechanics…

Anyway. They decided to Up Their Game by doing all of this in public, inviting an audience who could also ask us questions. And then we decided I should be the first to have a go at this…

So far, only edited highlights are available, but you can get some idea of how the conversation went here:

On International Women’s Day no less.

Marvellous transatlantic bookaholic and culture vulture Ceillie Simkiss (find out about her here) even elicited a description, including title, of what sort of burger I’d be…

All is revealed on this page.

I’ve lost count of how many stories, or parts of stories, I’ve set along this path.

This shot taken just as the ‘Beast from the East’ began to make itself known.

The following day it became passable on cross-country skis! 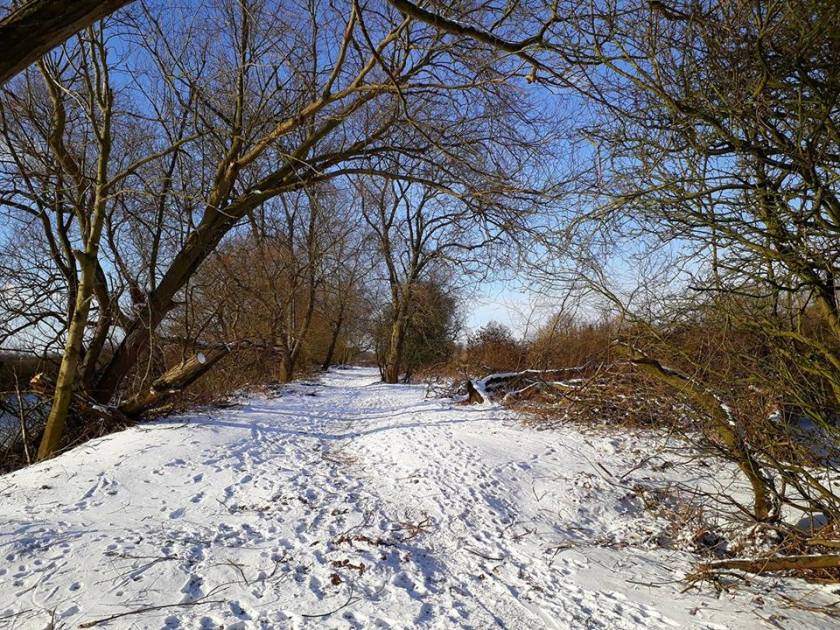